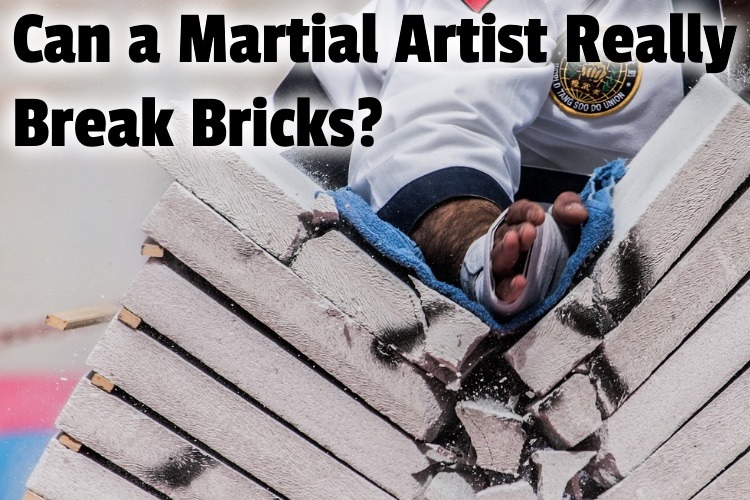 Breaking objects is a part of many different martial arts. You’ve probably seen some videos that look amazing. But are they legit? Can a martial artist really break bricks?

Here’s what I know from trying it:

Martial artists can break bricks. To break bricks successfully, it is important to select the right type of lightweight brick that isn’t too dense but dropping the weight of the body into the impact for greater power is also crucial.

And using the right part of your hand is crucial too. In some styles of Karate, brick or board breaking is even a requirement for moving to the next belt grade.

But breaking bricks can also be faked.

Bruce Lee didn’t think much about it. He said: Bricks don’t hit back. I suspect his point was that a martial artist is not going to gain much from hitting an inanimate object that can’t hit back.

And it’s true. For the most part, while not fake, board and brick breaking is showy and ego-boosting more than it is an effective technique.

But some are convinced that the technique required to break objects effectively can translate to real fights since it’s about learning to focus and to execute.

In this article, we’ll explore a couple of interesting issues around what’s going on when martial artists break bricks and boards.

I will impress @aliaa08 with my karate Skills by breaking bricks with my bare hands #HeroRide2Party @HeroMotoCorp pic.twitter.com/AaMnBpzuv7

Is there a trick to breaking bricks?

Breaking bricks is about hand position, timing, using body weight, and the right type of brick. But some may see it as a trick. Using lightweight bricks is crucial. And for breaking multiple stacked bricks, using pencils as spaces between them is important.

If spacers are not used, it is a lot harder to break. The heel of the palm is also what is used.

The heel has the most flesh to cushion the blow. There are also less fragile bones in that part of the hand. Punching a brick with bare knuckles would almost certainly break your hand.

When a martial artist strikes a brick, it’s done with speed and the exertion of the weight of their body through the brick.

This is important. They’re not hesitant.

They have already visualized breaking it, and they follow through in one fell swoop. They’re not second-guessing themselves and are not thinking of the pain.

It’s a practical example of Newton’s law of motion:

The “trick” is to ensure that the speed and the mass of the hand that’s striking the brick are higher than the force the brick exerts. The hand pushes through and trumps the resistance triggered by the density of the brick.

So, a martial artist aims beyond the point of resistance.

The trick is to “fully commit” to the strike and to push through. This is easy for martial artists because they have trained themselves not to be afraid of the impact.

Instead of “trick”, the word “technique” is more appropriate.

One of my favorite photos from the Iron Body Karate Dojo here in Wauseon. Alex Alvarez breaking 6 bricks, caught before it ever hits the ground. #IronBodyKarateDojo #TeamAlvarez #Karate pic.twitter.com/kYwwsr88NI

How much force does it take to break a brick?

It takes 3000 Newtons or 675 pounds of force to break a brick. The force is a function of the momentum. The more momentum an object has, the greater the force it can exert. In a test, a Karateka’s hand moving at 24 miles per hour was able to break the brick being used for the test.

In the 1970s, a strobe light was used to measure the speed and the force required to break bricks.

The test was performed by Michael Feld, a physicist at MIT, and Ronald McNair, his student (who happens to be his Karate instructor). McNair, a black belt, could chop a brick 11/2 inches at about 1900 Newtons.

Naturally, the force required varies with the thickness of the brick. To put the above in context, Feld said that a bone could withstand 40 times as much force as concrete.

“the unit of force in the meter-kilogram-second system equal to the force required to impart an acceleration of one meter per second squared to a mass of one kilogram.”

What is the science behind breaking bricks?

The science behind breaking bricks is that bone can withstand 40 times as much force as concrete. The more the force generated by an object, the more momentum it can generate. The break is done very quickly, and the brick bends during this period because of the accelerated velocity.

And the martial artist does not hesitate. They use the heel of their palm to strike the brick with maximum impact, as fast as they can.

Even though the hand does strike the brick, because it is more elastic, the hand moves up a bit and doesn’t break. But the brick does. And because they have had tons of practice, they do this with absolute confidence.

After all, brick and board breaking aren’t done by brand new students.

These experienced martial artists hit the brick with full impact, drop their whole body weight into it and follow through. Because the hand is more elastic than the brick, it can be quickly withdrawn.

A slab of concrete that can support, say, a force of 3000 Newtons or 675 pounds will break if a force that’s equal to it is focused on a single point on it.

Newton taught that for every action, there’s an equal and opposite reaction.

So, the strike triggers a reaction from the brick. What a martial artist does is try and ensure that the weight and the speed of the strike are greater than the opposite reaction that the brick generates.

It’s also important to note that it’s not for nothing that martial artists are careful in selecting bricks and boards that are relatively lightweight. If a brick is too dense, it won’t break!

Now, I’ve got a question for you: can you tell Kung Fu apart from Karate? A lot of folks find both a tad confusing.

But, you’re in luck because a recent article of mine is devoted to exploring 9 key differences between both highly popular martial arts.

Why do martial artists break boards?

Board breaking is about target practice. The ability to hit an opponent in a specific part of their body as quickly as possible is integral to martial arts. But it also trains the practitioner on how to use the weight of their entire body on impact and not just muscle.

Breaking boards is not just for fun or for show, even though it is.

But at the same time, they teach the ability to focus and execute with uncanny speed. It’s a way of learning how to hit the right spot, albeit in a highly dramatic fashion.

Hitting boards also teach a vital technique: how to hit stuff without injury to oneself. And how to accomplish something our brains are telling us we can’t do.

Oftentimes in martial arts and life, our overthinking is what keeps us from achieving things, not our actual ability.

If a martial artist can’t break boards, they can’t last in a contest. This is because even if they can focus and execute if they’re constrained by injuries, it would be very easy for their opponent to trounce them.

Another value is that the martial artist becomes stronger. The repeated practice gained in breaking boards would make the skin, bones, and muscles stronger.

Of course, at first, there would be microfractures that would eventually heal and consequently help the martial artist hit harder without feeling the pain so much.

But this is done on a gradual basis. You could start with one board and then increase that over time to avoid injury. If done carefully, the body gradually adapts to the stress inflicted on it.

But are martial arts worth the hassle?

Karate boards are not fake. But most Karatekas would not be able to break any piece of wood from the hardware store. Pine, being a softer wood, is used most commonly. Hardwoods are avoided. At times the boards might even be baked in an oven a bit. This dries them out and makes them easier to break.

And when a Karateka strikes, they strike along the grain.

They are easier to break that way. In fact, with some training, a lot of people, even children, can be taught how to break them.

There are no mystical powers involved.

The boards are not as hard as they look. Another wood aside from pine that’s often used is paulownia. It’s equally soft, too. Oak and mahogany are not used because they are hard.

The size of the board is also a key factor.

The size used by children is naturally different from the one used by adults. Boards with a size of 4″×12″×½″ are commonly used to train children.

The boards are real, but is Karate something you can also learn at home? Can you teach yourself?

In the article, we checked out whether there is a trick to breaking bricks in martial arts.

We also looked at how much force is needed. Then, we explored the science behind breaking bricks. And we found out why martial artists break boards.

Finally, we wrapped things up by finding out if the boards used in Karate are fake.

Image by Michele Stival from Pixabay